Study Group In Brain Based Learning Why Not Play?

Behind the curtains everything is chaos… The technical team redirects the lights, checks for wires on the floor, arranges the black legs, cleans the stage and verifies the musical instruments; everybody runs back and forth to organize the scenery, students hurry to their dressing rooms to finish their hair and makeup, to get their costumes ready and to breathe before the big show… They all wait for the command to start… and all of their senses are sharpened to receive instructions and begin the show…

I can’t help but think of all the steps that the brain undertakes to create that domino effect of alert: 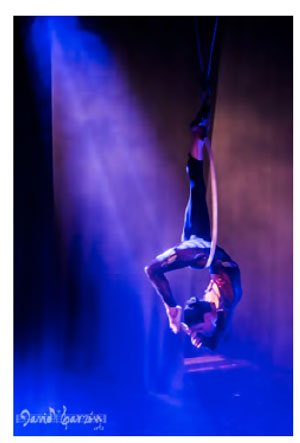 1. Information is perceived though our senses, or it is activated when we think or remember.

2. Information is first sent to the thalamus for initial processing.

3. It is immediately sent to the subcortical areas (e.g. the amygdala), which will recruit other regions.

5. If it is an emergency information, the amygdala responds promptly and recruits other brain areas.

7. Content coded as relevant tends to be stored for more time than content considered to be of low relevance, as it is explained by Choice Theory (Glasser, 1999), in the filter of total knowledge.

8. As time goes by, the hippocampus organizes, distributes and connects memories with the other
pertinent areas of the cerebral cortex to store them for the long term (Jensen, 2008). This is how the “Perceived World” is created, as Choice Theory explains (Glasser, 1999).

And with every explicit instruction from the accompanying adults, comes what cannot be seen: implicit information1 that is not taught by anyone, but it is experienced in every moment prior to a show. The implicit plus the explicit generate an endless array of emotions that vary from a dash of stress, a little bit of nervousness, a hint of excitement, a pinch of alertness and a good dose of satisfaction. So many hours, days, weeks and months of rehearsal will finally be a reality, through a cascade of hormones, neurotransmitters and neuromodulators2 that alert each and every body system, noticing the imminence of the upcoming event and asking those systems to perform their masterpiece choreography of team work, so that body, mind and soul are ready for the show.

Events that touch our emotions, such as a big school show, are remembered forever. Learning becomes much more meaningful and tends to be stored in our long-term memory. The difference between superficial learning and authentic learning is that the former is forgotten very quickly, while the latter lasts in time because it is satisfactory, involves emotions, makes sense, is personally relevant and encourages intrinsic motivation (Jensen, 2000). 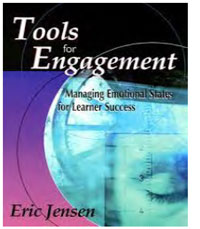 In his book “Tools for Engagement”, Eric Jensen urges us to think about our student’s emotional states as the fundamental basis for learning. A great revelation in the history of neuroscience was the discovery that all extrinsic behaviors are in some way related to the brain’s internal processes. All of the conscious states, from sleeping to imagining, wishing, dreaming and thinking, are the result of the electrochemical activity of the brain. Millions of neurons cooperate to form complex signaling systems that represent behaviors we call “states”. In the same way that the wind, sun and humidity collectively form the atmospheric patterns we know as “weather”, those emotional states permanently create atmospheric conditions in our brain. This weather varies every few seconds and everybody has the ability to control their internal brain weather; in other words, we can control the quality of our lives.

What we feel is real! And on stage this sentence becomes the power behind the work of every participant… Our feelings and emotions combine with our thoughts and actions, and this is finally reflected in our performing behavior, with the natural physiology that precedes that moment of facing the audience: a fast-beating heart, sweaty palms, dry mouth, etc… 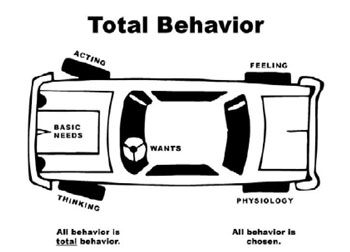 Here is where I can’t help but think of the “total behavior car”, a concept I learned with Brian Lennon during my training in Choice Theory in the late 90s, and that became a guide for many of the explanations about my own behavior and that of my dance students. Associating the four wheels of the car with the words thinking, acting, feeling and physiology, helped me create clear images of what I needed to understand about the daily reactions of my pupils.

Furthermore, linking the five basic needs (survival, love and belonging, power and recognition, freedom, and fun) with behavior, has been one of the most revealing experiences I’ve had as a teacher, because it enlightens in many ways the path towards my constant search for excellency as a dance teacher (Glasser, William, 1998). Understanding that my students have needs, and that if any of those needs is not satisfied then their behavior is going to be altered, was a realization that made a great difference in the methodology of teaching dance and its applications on the performing arts language.

This discovery defined the subject of the thesis I wrote for my master’s in Dance Education, at the University of New York in 1994; its central topic was the analysis of the learning environment of my dance classes, and its results are still a beam of light for this pedagogical path. 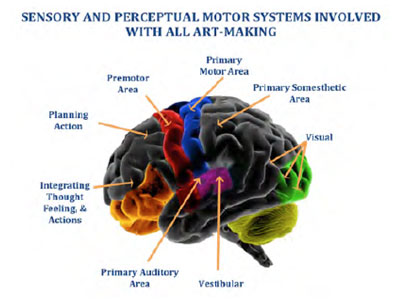 Artistic experience, seen from the classroom or the stage, involves specific anatomical structures in the brain, dedicated to the processing of that experience. In the 70s, it was thought that artistic experience only involved the right hemisphere of the brain, a notion that is now obsolete (Jensen, 2001). In his book “Arts with the Brain in Mind”, Eric Jensen poses that the arts are a major discipline with measurable results that are culturally necessary, exist in all populations and have an enormous ethical and aesthetical value that can be exercised rigorously; it is a major discipline that creates a curricular symphony of profound, transversal, sequential, continuous, articulated, vertical and horizontal character. In that same book, Jensen claims that the arts enhance the learning process thanks to the neurobiological systems they nourish: the sensory system, the attention system, the cognitive system, the emotional system and the motor system, among others. 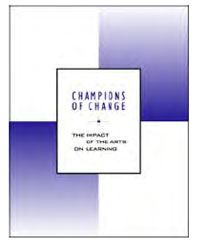 In his compilation research paper, called “Champions of Change: The Impact of the Arts on Learning” (1999), Edward B. Fiske analyzes the non-academical benefits of the arts. I have been able to recognize some of them in our school environment during the past 25 years of artistic experiences at Rochester School.

Fiske describes them as follows:

I return to my starting point… A school show is much more than what the audience sees. A school show is brain, emotion and cognition at the same time. Artistic experience in the classroom or the stage provides multiple growth opportunities at the social, emotional, cognitive, spiritual and physical level… And there are still people who wonder if the arts are useful in a school environment… It’s clear that the answer lies in the text of The Little Prince -“the essential is invisible to the eyes”-, says Saint-Exupéry.

Next time any of you readers sit down to watch a show, make sure your glasses are on so that you can observe what cannot be seen: the symphony of corporal systems, the choreography of neurotransmitters in permanent action, the music sheet of infinite neural connections, and the satisfaction of needs, all of the elements that turn dancers, musicians and actors into super-humans… Those humans that have mutated thanks to the unique and unrepeatable artistic experience!

1 The term “implicit learning” refers to the fact that 99% of our learning happens unconsciously, according to Dr. Emile Donchin of the University of Illinois (Jensen, 2000).

2 Neurotransmitters, such as acetylcholine and norepinephrine, are the biochemical messengers of the body that are stored in the axons of neurons and are released during synapsis for the chemical conduction of the nervous impulse; neuromodulators, such as ATP and adenosine, are substances that are secreted and act similarly to neurotransmitters, except that they not only exist in synapses, but also as extracellular fluid; hormones, such as ACTH and adrenaline, are substances secreted by specialized cells called glands (pituitary, thyroid, parathyroid, suprarenal) and travel through the bloodstream, affecting various body processes (Sousa, 2002).

By Iliana Aljure
Artistic Director and Vice-president of Fundación Educativa Rochester in Bogotá, Colombia, a Glasser Quality and Leed Certified Green Building private school. University Degree in Bacteriology from Universidad de los Andes, Master's Degree in Dance Education from New York University, Specialist in Quality Schools from the William Glasser Institute, Brain-Based Learning Certification from the Jensen Learning Corporation, more than 30 years of experience in dance education, choreographer of school artistic shows and director of the artistic administration area. Training in Teaching for Understanding, Multiple Intelligences and How to Make Thinking Visible. Since 2007, committed to disseminate and transmit Brain-Based Teaching ideas and research to students, parents, teachers and education administrators, making emphasis on the importance of placing the brain at the center of the teaching-learning process.